Today is Nepali New Year, hence yesterday evening was New Year’s Eve – a big event: all streets were even more crowded than usual. After our dinner in the Garden of Dreams, we went back to our hotel. Ciprian and myself decided to go out to see some of the celebrations. We found a nice wine bar with roof terrace, but actually there was not so much to see, more to listen: loud music everywhere.

When we came back, I noticed that Dawa was online. We chatted and he told me they had had a rough drive, but were getting c;lose to the Tibetan border. This morning I spoke with Namgya, he confirmed that they are at close to Timure and hope to pass the border tomorrow. The Chinese have opened the border and the Russians (Abramov’s 7 Summits team) and the Swiss (Kari Kobler’s expedition) had already passed.

Prem told me that our visa are ready and he will bring them to us tomorrow at 7 AM, before we take of to the airport to fly to Lhasa.

Yesterday, after a very long layover at Delhi airport  since KLM arrived too early, but Jet Airways was delayed several hours due to foggy wheather at Kathmandu, I arrived in Kathmandu around 11 h. Actually, that was not too bad since Ulrich and Ciprian both arrived just half an hour later, both on the same flight from Doha. We got to he Shanker hotel swiftly and unpacked. Namgya did not even take an effort to check my stuff and just told us that he would pick up the luggage for Tibet at 16 h. At 16 h he arrived with his younger brother Pasang who will join us as climbing sherpa.  Pasang being still in Kathmandu (instead in Tibet, where he was expected to be) is due to the Chinese authorities keeping the border shut, which, unfortunately, will delay our expedition a couple of days. The good news is that, as a consequence, the entire team is still in Kathmandu so we could have dinner together. Traditionally we have dinner with the team in Kilroy’s, and so we did this time.

I’ve borrowed my daughter’s little video-camera and obviously do not know how to use it properly as yet. Nevertheless, on the short video you can see the faces of all team members: from left to right, in the order of appearance: Ciprian, Prem (who will stay in Kathmandu as communications officer), Ulrich, Namgya (our sirdar), Dorjee (our chef), Dawa (one of our climbing sherpa) and Pasang (the other climbing sherpa).

This morning the good news arrived that the Chinese authorities will open the border in the next few days. Hence, Namgya, Dorjee, Dawa and Pasang took off early this morning.

Ulrich, Ciprian and myself went on the obligatory sight-seeing tour of Kathmandu with Suresh, a local guide. We visited Pashupatinath and Boudanath. I’ve visited both places before and both are obviously quite badly damaged by the earthquake from almost a year ago, but both are being rebuild.

This morning, I’m leaving for New Delhi on KLM 871 for New Delhi from where I will –  after a long layover – fly with Jet Airways 264 to Kathmand 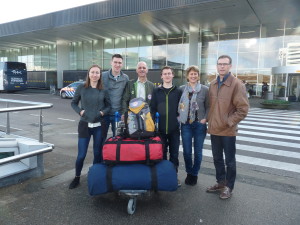 The whole family dropped me off at Schiphol Airport, where Jetze, my climbing partner on the 2012 expedition, and Hester where already waiting to say goodbye.

Just chatted with Pasang: it seems the Chinese keep the border still shut until the 15th. This means that Namgya, Pasang, Dawa and Mingmar won’t be able to travel to Tingri on time and the expedition may be delayed a little… The good news is that we will be able to meet up with the entire team in Kathmandu.

Namgya informed me that our Nepalese team is now complete.  Namgya will be our sirdar and our two climbing sherpas will be Dawa Finjok Sherpa and Pasang Sherpa, Namgya’s youngest brother. Both Dawa and Pasang have climbed Everest three times, and both have also climbed Kanchenjunga (with 8586 m the third highest mountain of the world) and Lhakpa Ri several times. Our chef will be Mingmar Dorjee Tamang, who has worked with Namgya for more than 10 years. 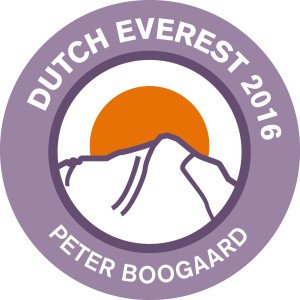 ia the Friendship Bridge in Zhangmu as planned because the administrative units in Zhangmu and Kerong are still not operational due to the earthquakes last year. Hence we are forced to travel through Lhasa.

We were also told that, since they are still coping with issues related to the earthquakes, only a limited number of climbers will be admitted. The good news is that climbers who had a permit last spring, get priority this year. The bad news is that they won’t accept the revoked permits from last year as they promised when we were evacuated last year. We will have to buy a new permit for this year.

The Dutch Everest 2016 Expedition is on…

th, I’ll fly to Kathmandu for the third attempt to climb  Mount Everest. Like in 2015, we will try again from the Tibetan side, following the Mallory route.

Wongmu Sherpa, who coordinates the programme to help re-building Lukla, has joint forces. In a joint effort of “Tiles for the roof of the world” with similar earthquake relief programmes funded through Barbara Byam and Bryan Wood & Ellen Ruggles,  food was supplied to families in Chourikharka, a village less than a mile from Lukla which was severely hit in the earthquake of April 25th and again in the quake of May 12th. The food supplies allow the families to keep (re)building their homes without worrying about an income to buy food. 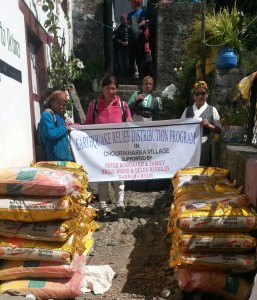 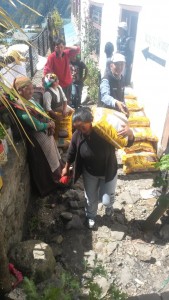 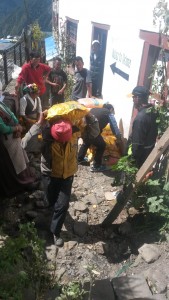 Of course, the very best way to help Nepal overcome all the problems caused by the recent earthquakes is to visit this fascinating country. There are endless possibilities for trekking and climbing. Visit for instance www.grandhimalyaexpedition.com to get an idea of the possibilities.

At the request of many, we have set up a fundraiser to help rebuild Nepal. We have chsen to focus on the village of Lukla.

Details can be found under Fundraiser “Tiles for the Roof of the World” in both Dutch and English. 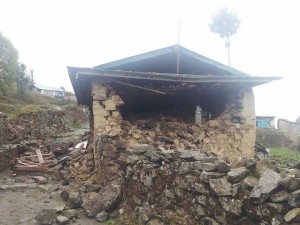 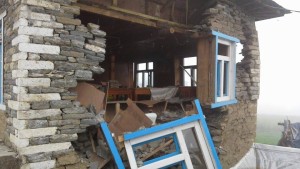 This weekend, Namgya, Nima and the other sherpas got safely back to Kathmandu and their homes… as Namgya said “after another frustrating season on Everest Expedition”.

Thanks to everyone for their support and comments, here as well as on Facebook. They are not only highly appreciated but also very important to keep the team going on the mountain.