Mount Everest is called Chomolungma, meaning “Mother Goddess of the Universe”, in Tibetan/Sherpa language. Located in the Mahalangur section of the Himalayas, Mount Everest proudly elevates itself 8,848 meters (29,029 ft) above sea level and forms the Summit of the Earth.

The most popular route on Everest – which we attempted in the Dutch Everest 2012 expedition – is via the Southeast ridge from Nepal and is also known as the Hillary route. This time we will attempt the Northeast ridge, which is commonly referred to as The Mallory Route since this approach to the mountain was discovered by George Mallory along with Guy Bullock on the initial 1921 British Reconnaissance Expedition. Mallory disappeared with Andrew “Sandy” Irvine from the ridge after a summit attempt in 1924. Whether the pair reached the summit is an enduring mystery.  Later, on 25 May 1960, the Northeast ridge route was successfully climbed by Qu Yin-Hau (China), Wang Fu-zhou (China), and Nawang Gombu (Tibet). They were officially recognized as the first climbers to scale Everest from North side. The Northern route is technically harder and more demanding than the more popular Southeast route, but has less objective dangers. 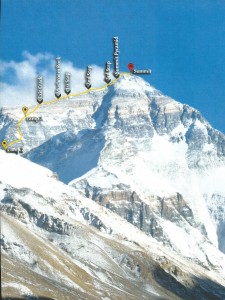 We will fly from Kathmandu to Lhasa from where we will start our expedition. We will travel via Gyantse and Xigatse using the high road the Chinese have rather recently build. From Xigatse, where we need to collect our permits, we will proceed to Tingri (4350 m) where we will spend a couple of nights for better acclimatisation again. Then we hope to go to Everest Base Camp (EBC, at 5250 m) also called the ‘Chinese Base Camp’, and then we will trod the footsteps of George Mallory. 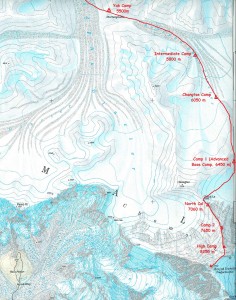 From ABC we’ll ascend over the glacier to the North Col (Chang La) at 7010 m, where Camp 1 will be built. Then we’ll ascend the rocky north ridge to set up Camp II. There is a long reasonably angled snow slope to 7,500m where sometimes put  Camp II can be build on a snow ledge. Depending on the conditions Camp II can be build further on, up a series of rock and gravel steps at 7,775m. Between these 2 camps, it is usually extremely windy, like in High Camp of the Southeastern route. The route continues from Camp II to High Camp (Camp III) crossing the North Face in a diagonal climb to the base of the Yellow Band.  High Camp is normally on rock at ~ 8230 m, but may be snow-covered. From High Camp, we will make our final summit push. 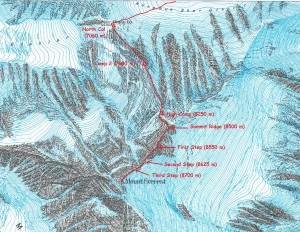