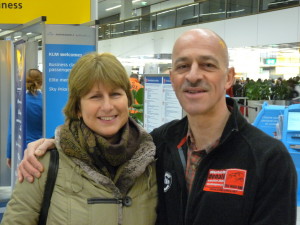 The expedition started with a long series of flights: on Jan 6th from Amsterdam to Lima, then from Lima to Santiago and finally from Santiago to Punta Arenas, the most southern settlement in Chile at the street of Magelhães where I arrived on Jan 7th.

The weather was OK to fly to Antarctica on Jan 10th, but when we reached the airport, we got the message that it wasn’t good enough: the strip at Union Glacier (essentially 2 miles of flattened glacier) has no radar or beakens, so the weather must be as good as perfect to be able to fly there. 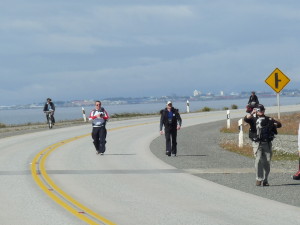 On Jan 12th the weather was fine, but there was a local strike and the city was blocked from the outside world, so we could not reach the airport. After a couple of days, still all roads are blocked as the strike got worse rather than better: carabinieri were sent from Santiago but they 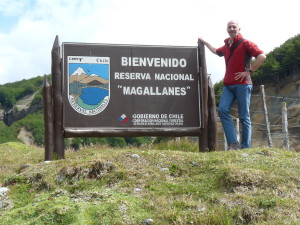 could not solve the issues and more and more riots happened and people were killed. After days waiting in frustration, we decided to walk through the hills to the airport to circumvent the blockades. We were excited when we reached the airport, but that was soon over since the Russian crew had found a leak in the fuel regulator of the Ilyusin-76 bomber and decided we co 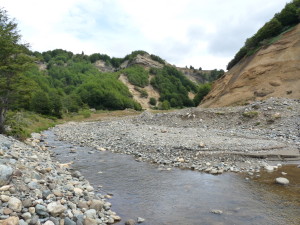 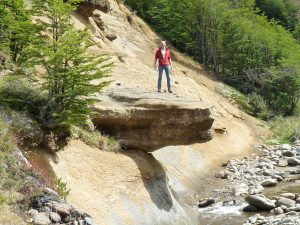 Highly disappointed we returned again to Punta Arenas. The new fuel regulator was ordered in Dubai flown to Dresden and then to Madrid, and then… DHL lost the 80 pound metal contraption. Luckily it was found two days later and on Jan 21st we could finally fly to the ice. In the mean time, I had seen every spot of Punta Arenas and the nearby National Park and we were really glad to go…

The flight was spectacular, but Antarctica even more… endless snow-covered 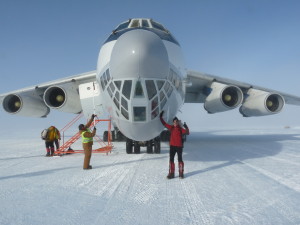 glaciers and mountains, continuously in the sun. We stayed 2 days in Union Glacier camp and then the weather was good enough for the small Twin Otter on skis to fly to the glacier in the Ellesworth Mountains where Vinson Base Camp was located. We are flying there on the day that my return flight was scheduled… 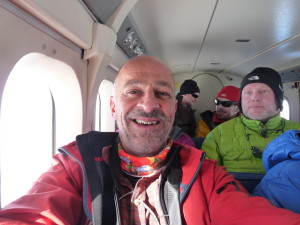 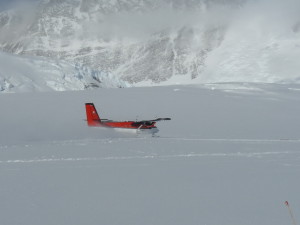 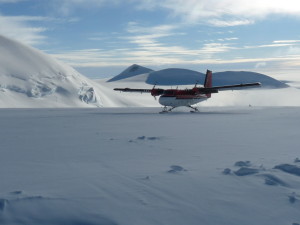 After a single day in Vinson Base Camp (Jan 23rd), we got ready to climb to Low Camp. It took us 6 hours to get there, with an stop at intermediate camp. It’s fairly cold, about minus 23 ◦C.  From Low Camp we made an acclimatization tour, try to climb some of the fixed lines (which turned out really easy – I would not have any rope if I had been alone). We sleep another night (although the sun shone brightly of course) at Low Camp. On Jan 25th, we pushed to High Camp 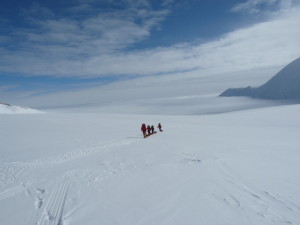 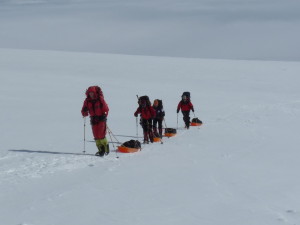 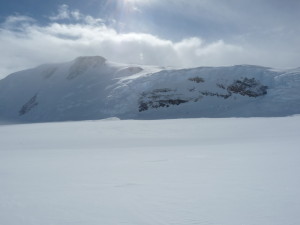 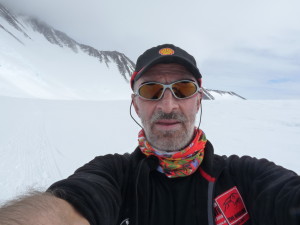 climbing the steep ice wall. Everybody seems to think I’m the strongest ice-climber and the first 600 m of the ice wall go really well, but it gets quite cold. Especially my right hand feels frozen. Nevertheless, I’m the first to reach the top of the wall  in less than 4 h. The climb to High Camp itself takes me a lot of effort and I feel dizzy when we have to set up the tents. I might be dehydrated or so, but don’t feel too well. The meal is OK but I hardly eat anything. Luckily I sleep very well. We stay one day in High Camp. The weather is beautiful and I would have liked to make an attempt to the summit, but do nothing than hang around, dry some equipment and eat. 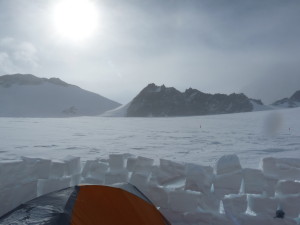 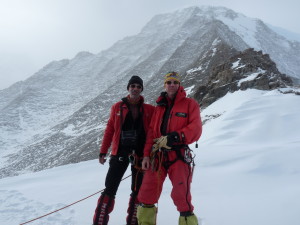 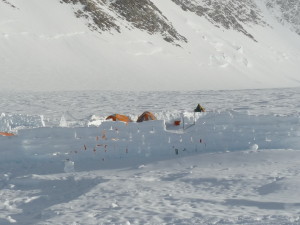 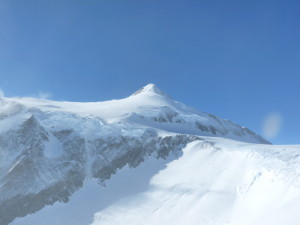 The next day, Jan 27th, we get up early and dig out our tents and equipment as the storm that had passed by during the night has covered everything in a thick layer of snow. It’s past 10 AM when we finally get on the route. It’s with minus 45 ◦C really cold and I’m shivering. The top ridge is very exposed and I’ve never felt so cold my entire life. I’m considered the technically most skilled climber and get the last position on the rope. We make very good progress despite the cold and reach the summit in a little more than 4 h. We make the obligatory pictures from the summit: the views are stunning, but the cold is so ghastly that we decide to go down quickly. We rush down with only a single short stop and are back in Base Camp rapidly. The whole tour has taken us only 7 ½ hours, whilst the other 2 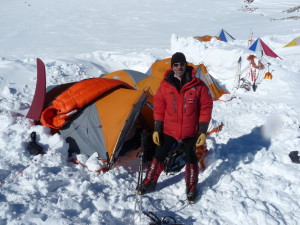 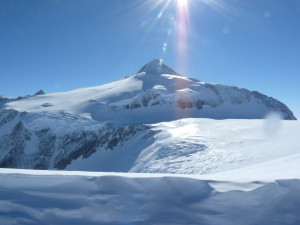 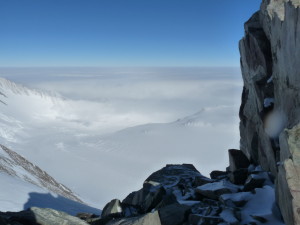 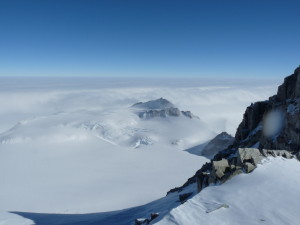 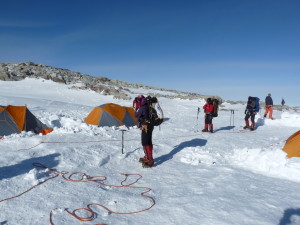 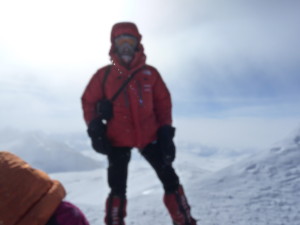 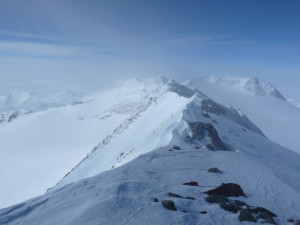 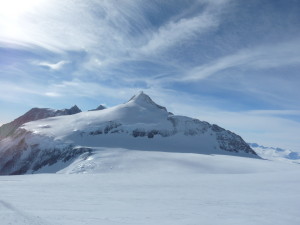 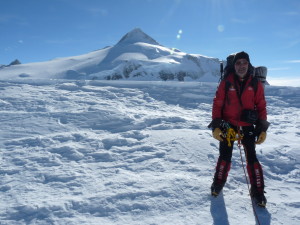 groups took 13 and more than 16 h. I’m really glad our group was so fast as I’m pretty exhausted from the cold and climbing. My tent-mate Chris, from Australia, drops into the tent about 4 ½ h after my return and he is totally done. I even have to help him remove his boots and clothes as he’s unable to do anything himself being totally exhausted. We are told that due to the wind and the wind-chill factor we’ve experienced temperatures around minus 60 ◦C. However, we made the summit and can return to Low Camp.

Next morning, we return swiftly to Low Camp and proceed to VBC. We’re ready to go home, but we have to wait for good weather again so that the Twin Otter can fetch us. I kill the time with playing cards with 4 French soldiers from the ‘Groupe Militaire de Haute Montagne’ of the French army, a kind of military propaganda team of mountain guides of the French army. I happy to be the only other person in the Camp that speaks French and we actually have a very good time. In the evening I have long discussions with Namgya Sherpa – it is there I decide that if there is anyone in the world I like to climb Everest with, it would be him…

We wait and kill the time with silly things as sledge races from the slopes nearby VBC. On Jan 31st the weather is perfect, however, our Twin Otter is busy transporting to the geographical South Pole. We are flabbergasted… but it turns out that both DC3’s which are dedicated for flying the stretch to the Pole are already out of lease and flew back to Canada. Our trip has taken so long that we are beyond season…. Furthermore, our supplies are shrinking rapidly… It’s getting warmer, about minus 25 ◦C, which is quite a relief as the past few days have been really cold.  On Feb 1st, late evening – but it’s always light on Antarctica in Summer – the Twin Otter can reach VBC. WE cannot fly back though since the pilots need a rest and we get to sleep as well. At 3:30 AM we wake up again, and at 6 AM we can finally get back to Union Glacier.

Then the waiting starts again… Luckily I can reach Aly with the satellite phone to, once more, delay my flight home. Again it’s killing tinme: this time I go cross-country skiing which is a splendid experience at Antarctica, probably the biggest skiing area on the globe. On Feb 4th the Ilyushin-76 can finally fly and take us back to Punta Arenas.