Yesterday we made the first climb from EBC to Intermediate Camp (IC). We, that is, apart from Ciprian and Namgya, also Bo. Bo makes use of our support system up to Advanced Base Camp (ABC). He is from Danmark and used to be in the Danish selection. He’s 58 and took early retirement 3 years ago and is now only climbing.  His current project is climbing the 14 mountains over 8000 m without oxygen.  We set out at 9 and were doing fine although Ciprian could not keep pace with Bo and myself. It was decided that Namgya would take him down whilst Bo and I continued to Intermediate Camp. We reached the camp in 4 h 15 min which is excellent as the standard time is 5-7 h and 4-5 h for well acclimatised climbers. On our way down (2 h 30 min while standard time is 4-5 h and 3-4 h for well acclimatised climbers) we overtook Ciprian and Namgya. Ciprian seemed to have cardiac problems and was very worried. After some rest and dinner, the doctor of the Indan team examined him. He agreed, with the Romanian doctor Ciprian already consulted, that he should take no risk but nevertheless with until this morning. Ciprian got up early and tried to climb some nearby hills but got serious chest congestion. He then decided to go home and left an hour ago for Tingri. So ftom now on, I’m alone and officially the smallest expedition on the mountain. Luckily,  Bo will keep me company still the next few days up till ABC. 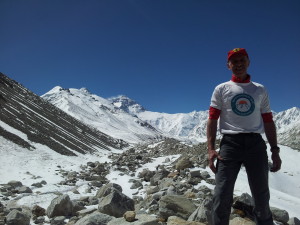