Tomorrow we make the move to Intermediary Camp (IC) where we plan to stay one night before we push to Advanced Base Camp (ABC) at 6450 m where we will stay for several days and from which we will try to climb to the north col (7060 m) .and build Camp 2 (C2) at 7650 m. Once succeeded we’ll come down again to EBC probably around May 5th.

Yesterday and today were used for further acclimatisation. Today my heart rate dropped below 60 bpm at a blood pO2 of 85+% which is not too bad. Yesterday,  the Indian team set out at 10:30 h to climb a nearby peak. Nima and I left at noon to climb the same peak and overtook the first Indianns half an hour later.  We reached the summit at 5740 m as firsts and I was back at EBC 14:45 h. Today we climbed a peak at the opposite side of the valley. Apart from Bo, Michael a young Chinese guide, climbed with Namgya and myself. We climbed the 600 m to the summit in less than 2 h despite the cold and extremely hard wind and rushed down in 50 min which is very acceptable at this altitude and we fedl acclimatised well enough for the move to IC and ABC. 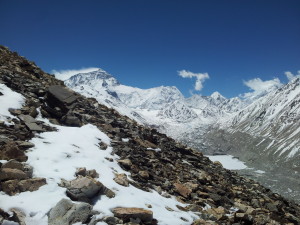